One of the most overlooked stories of the preseason is unfolding in Washington, where defensive tackle Phil Taylor is on track to earn a spot in the Week One starting lineup after two years out of football. His new head coach wasn’t even aware that Taylor was out of football. “I was in Cincinnati for three years when he was at Cleveland and I know what a force he can be at nose [tackle],” coach Jay Gruden told reporters on Saturday. “He was tough to deal with, he really was.
2 views0 comments
Matthew Florjancic

Joe Thomas humbled by Player of the Year honor

CLEVELAND -- Cleveland Browns left tackle Joe Thomas just keeps adding awards and honors to his trophy case. One week after being named to his 10th straight Pro Bowl, Thomas was honored as the Player of the Year by the Cleveland chapter of the Pro Football Writers of America, the team announced Wednesday. “It is very humbling,” Thomas said. “On a better season, you hope that one of the skilled guys gets voted in because that means that you have scored a lot of points. Und
6 views0 comments 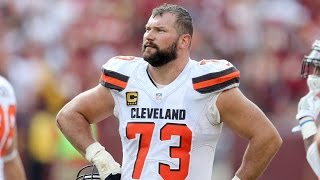 Cleveland Browns left tackle Joe Thomas is a perfect 10-for-10 in being selected to the Pro Bowl during his NFL career. Thomas has started all 158 games since being drafted in 2007 and has a consecutive-snap streak of 9,791. #Joe #Thomas #ProBowl #Cleveland #Browns #Tackle #Veteran
13 views0 comments